Traditional, religious and community leaders of Santa subdivision turned out massively for a training workshop on gender-based violence, and grievance redress mechanisms. 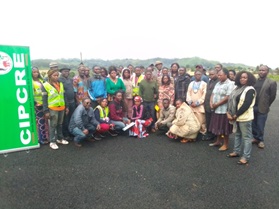 It is in the context of Transport Sectors Development Projects (TSDP) that the International Circle for the Promotion of the Creation (CIPCRE), organized, on the 9th of June 2022, a training workshop on gender-based violence (GBV), and grievance redress mechanisms (GRM) with traditional, religious and community leaders of Santa subdivision.

The training workshop was with the objective to reinforce capacities of the various traditional, religious and community leaders of this subdivision with some techniques on curbing and preventing GBV in their various villages/quarters. The training workshop which was massively attended by 47 participants including 9 women, saw leaders from Meforbe, Santa-village, Akum, Mbie, and Njong trained, and briefed on GRMs. In a heated brainstorming during the workshop, participants presented their means in the fight against GBV, that included “conveying educative messages to people during traditional council meetings, passing information against GBV during church services and in community meetings”, but not withstanding, they outlined some constraints to this effect. Expressing satisfactions about the lesson on GRMs, these leaders pointed out some challenges (destroyed uncompensated properties, corruption during compensation of victims of destruction and people’s properties not properly evaluated…) they have faced in the past few years when projects are being executed in their communities and especially with the Babadjou-Bamenda road rehabilitation, thus highlighting the importance of such a mechanism (GRMs) to the population of Santa subdivision and environ.

Ending the workshop, the different leaders demonstrated signs of satisfaction and used these two words “eye-opener and excellent” to describe the training session. They also promised to utilize the knowledge acquired from the training workshop to boost the fight against GBV in their communities. 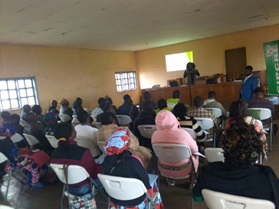 Not just limited to that, they requested CIPCRE to frequently organize such enriching workshops to train and capacitate people with the required techniques to fight against GBV and foster sustainable development in the society, and that CIPCRE’s presence in their communities will be of greatness as far as raising awareness and captivating people’s attentions on GBV is concerned.

Nevertheless, CIPCRE is engaged in the fight against GBV, and is doubling efforts to see that this fight against (sexual abuse, sexual exploitation, domestic violence and child neglect), is extended to other subdivisions in the Northwest region of Cameroon.